← Forest or the Trees – What comes first?
Doing the Reading →

by adminon June 3, 2011 in Uncategorized with 1 Comment
Tweet
I received my first advice on learning at a young age. I was six and visiting my mom’s home town of Nackawic, New Brunswick. She grew up in an Irish family of 15 on a small farm. Their life was like a Canadian version of ‘The Waltons’ US TV show.
My older brother, Steve, and I were ‘city boys’ who had zero farm credibility. It made it hard for us to blend in with our local cousins. One day, my cousin Ed, who must have been around 18 at the time, invited me to go see his pigs. I was dressed like a city boy in white shorts, red and white striped shirt and red sneakers. Once we got there I saw two huge hogs (not pigs like Wilbur, the only pig I thought I knew). Ed was a fun guy, with a carefree smile and mischievous eyes. I remember him looking at me and laughing about how my mom was going to give me heck for muddying my shoes, which by now were covered in a thick and smelly muck. 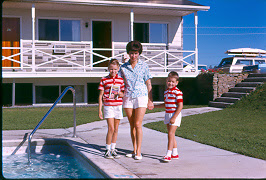 Ed then said, “Phil, in life you need to learn from the best so that you can be as good as they are. It costs more but it’s worth it.” Then, with a characteristic smile and wink, he said, “Now take hog killing, for instance. I hired Harry to come over and show me how to do it. I had never done it before and knew he was the best in the county.” Then, he went over to one of the hogs and pulled it closer to me. He went on, “I hired him for an hour and asked him lots of questions as he killed one of my litter. Today, I am as good a hog killer as he is.” He dramatically emphasized “as he is” with a swift and accurate turn of his knife. I remember looking down at my clothes and shoes  that were now splattered red. Let’s just say that in addition to his powerful lesson on learning, Ed was also right about my mom giving me heck about staining my clothes.

I remembered Ed’s words of wisdom this week when our son Sam and I learned how to re-string a guitar. We watched an expert on Youtube demonstrate the best way to attach the strings and then applied the steps to Sam’s guitar. The first string wasn’t the greatest and needed to be restrung a couple of times. The second was better, the fourth snapped and startled us, the fifth was good and the sixth snapped and didn’t startle us (we were used to it by then).

Sam remarked that he never wanted to re-string a guitar again in his life. “It’s worth the 25 bucks to have the guy at the music store do it,” he said. Thanks to Ed, I felt differently. I explained that we would get better at it and before we knew it we would be experts too. We replaced the two broken strings and then I restrung Charlie’s (Sam’s brother) guitar perfectly.

I realize, thanks to cousin Ed, that I also must become a proficient writer, in addition to providing excellent content. Time to start learning from the experts.
Phil