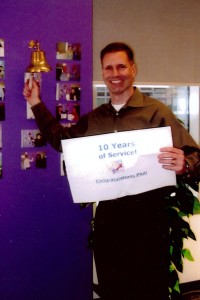 The Cadbury Adams Canada HR team members had gone through a difficult period when I became their leader. They had successfully supported a merger and were in the midst of transitioning to a regional administration services model. They were tired and unloved.

I was thinking of how I could boost their spirits and self esteem when I remembered a story about a sales team that rang a bell every time a sale was made. That night I went on Ebay and searched under ‘nautical bell.’ Up came a few choices including one that looked like the real deal. I started bidding and eventually bought it for $19.

I installed it on a highly visible wall and asked the team to gather around our new spiritual beacon. I said we needed to celebrate the great things we did and from now on, whenever a team member got a win, he/she would ring the HR bell.

The team would gather to hear the details, applaud, and have a picture taken. It took a while for people to use the bell but it eventually became a part of our culture. Also, visiting senior leaders agreed to have their picture taken with the bell, which added to its allure.

It was a curiosity to other departments but was a source of pride for us.