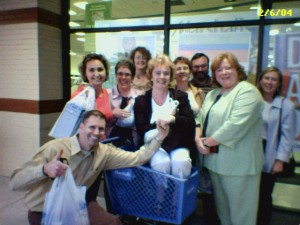 Three was a team of about 10 Canadians who were commuting weekly to the US. We stayed in a small town called Parsippany, New Jersey, made famous by the line “ I’ve got an uncle who lives in Parsippany.” in the movie “The Karate Kid.”

Other than a movie theatre, there wasn’t much to do except work and eat. However, there was a Marshall’s, a brand name discount clothing store. At this time the chain had not entered Canada so it was an exciting haven for bargain shopping Canadian’s.

A few times we planned mass shopping excursion followed by dinner as we shared our latest bargains. Our American friends thought we were crazy but we had a blast.

It doesn’t take much for a team to have fun, but it is absolutely crucial that they do, by any means possible.