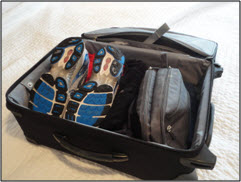 Running on a treadmill was a staple of my travelling work-out regimen. One day, I thought it would be great if I hit the road instead of hitting the treadmill. My next trip was to Zurich, Switzerland that looked like a safe place to try it out. I got to my hotel at 9:15 p.m. after a working dinner, which left plenty of time to get an hour run in.

As I was putting my running clothes on I noticed that I had mistakenly packed my wife’s Lycra running shorts instead my guy shorts. I had two options: run in my wife’s size small women’s leggings or don’t run at all. It was dark and the streets looks quiet so I opted for adventure. I had to lie down on the bed to squeeze them on. I thought to myself, “Boy, women’s small is really small.”

I was excited by the prospect of running with my ipod on the streets of Zurich. I thought it would be wise to run in a straight line and then retrace my steps. That way I wouldn’t get lost. Off I went like a shot saying to myself, “I’m an international runner, I’m an international runner.” After 30 minutes and two bridges I turned around and headed back to home. Over the first bridge I went. About 10 minutes later I hadn’t crossed the second bridge and I noticed that the surroundings looked a little different. The road that appeared to be a straight line was part of many interconnecting streets – I had missed my turn.

After two-and-a half hours I saw my hotel in the distance. I started running toward it and as I approached the parking lot I saw a woman walking towards me.  As I got closer I heard “Phil Buckley?” It was my boss from two years ago. What are the odds? We chatted for 30 minute and all I could think of was “I am wearing size S women’s leggings.” I learned that you always need to be prepared for adventure and that most unwanted adventures can be avoided through proper planning.