During the roll-out of a company-wide culture project our change team created an activity for solving problems where people were asked to tell the story of an issue by using prehistoric icons. Participants were provided with felt cut-outs of prehistoric animals and symbols, as well as extra felt to create their own icons.

‘Cave Drawings’ was a hit in North America so we were excited to use it with a group from the UK. “They will love it.” we said.

Things didn’t go as planned and not all team members got the purpose of the exercise. Some refused to participate. And others just said, “Interesting.” We had failed to consider the cultural differences and learned to test tools with members of each group before using them. 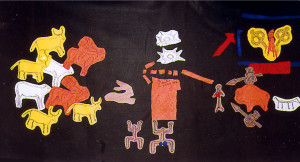