The First Time is for Learning, the Second is for Success

← Are you still searching for your dream job?
12 Ways You Know that a Team is Ready to Take On Change →

The First Time is for Learning, the Second is for Success

“There’s nothing better than being embraced by your peers. People who know what it takes to do that, who said, ‘We think that you deserve to be nominated.’ I mean, it doesn’t get better than that’.” That’s what Oprah Winfrey said this week when she learned of her Screen Actors Guild supporting-actress nomination for The Butler. 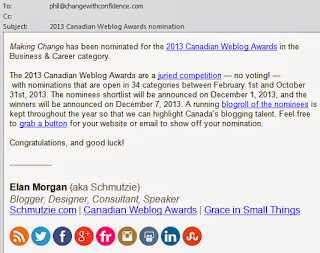 I didn’t think such noble thoughts when I found out that my blog was nominated for a Canadian Weblog Award. I thought, ‘Wow, I got nominated!”

The Canadian Weblog Awards are judged by a volunteer jury that rates blogs according to: 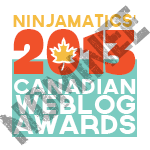 Making Change was nominated in the Business & Career category  that had twenty-one  nominations. The competition was steep.

I didn’t make the top five shortlist. This didn’t discourage me; it ignited a challenge for next year. Throughout my Change with Confidence journey, I have learned that trying something for the first time is about learning how it works. Taking action on these learnings is how you succeed.

Here is what I will do to prepare for next year’s competition:

Until then, congratulations to the shortlisted and top-three winners of each Weblog category. I am look forward to reading their blogs.