10 Tips on Managing Yourself through a Crunch Time 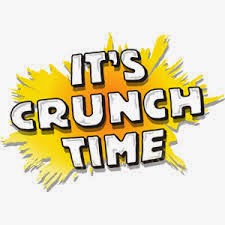 Most people experience spikes in activity that appear to be greater than the hours available to complete them. There’s much to do and so little time to do it in. Does this sound familiar?
My challenge in crunch times is not changing my behaviour to accommodate the extra work. I try to cram everything into my existing schedule, which causes frustration and stress. I even take on new activities, which increases the pressure.
What I have realized is that you need to adjust your thinking and actions as soon as you realize that a heavy workload is coming. Here is how I plan on managing one I am about to take on: 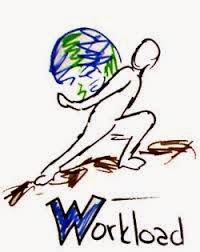 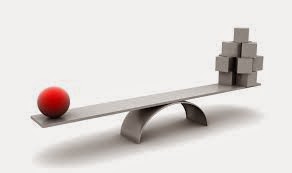 Spikes in activity are common in most roles and professions. It’s a side effect of today’s constantly changing work environments. How you manage them determines whether you crunch the work or the work crunches you.
Phil

Advice From the Big Chair

On Wednesday, my friend Mel and I attended a “meet the author” session with Wayne Johnston, a celebrated Canadian writer. He is one of my favourites and I intended to ask him for advice on approaching publishers, my next mountain to climb.


Everything was going well: I confirm the session, my camera was charged, and we arrived twenty minutes early. As we were waiting in our second row seats (we chose not to run when the doors opened), I decided to buy a copy of “The Custodian of Paradise” for Wayne to sign. I also was going to ask him to include his favourite motivational saying, something I had asked Mark Tewkesbury, gold medal swimmer from the 1992 Summer Olympic Games, when he was a mystery guest at a business conference. He wrote, “Why not me?” It didn’t really make sense until I started writing my book.

At the start time, an empathetic co-ordinator informed us that Wayne had not yet arrived and they were trying to locate him. Every ten minutes she updated us on their efforts to find him until forty minutes had passed when she said they still could not find Wayne and  she would try to reschedule him for the fall season (she did a great job).

All was not lost: I had a great time with Mel and we discussed a few open items about my book. You can find advice and inspiration in many places and often the best guidance is not planned.

Ending With the Beginning in Mind

One of the first lessons my editor, Ken, taught me was that you write the introduction after you complete the book. I will call the one I wrote before meeting him “draft 0.” It now makes sense since my book has changed shape almost weekly and my early thoughts on what the introduction would say have also changed.


There’s a lot at stake with the introduction. It has to grab readers as they scan it  and convince them that the book is worth their time and money. It must clearly state:
– Who the book is written for (who will benefit from reading it) 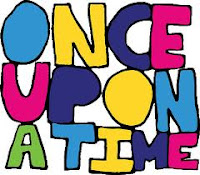 
Basically, the introduction has to convey the essence of my book in a few pages. With only six short case studies to write before I complete my book’s content, I have been psyching myself for my next challenge: to nail the introduction. It’s time to tell my story.

The Best is Yet to Come 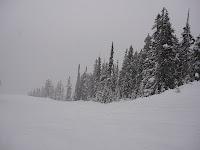 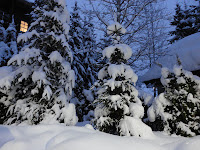 In the late 90s, I was influenced by the writings of Dan Sullivan, the founder of The Strategic Coach program, a process for helping entrepreneurs grow. His perspectives helped me manage my career and life. One of his core processes is called The Entrepreneurial Time System where time is divided into three types of days: “free days” (off-limits days to  rejuvenate), “buffer days” (preparation days), and “focus days” (performing days).


Although I couldn’t organize my time in this way, I did benefit from the thinking behind it. In particular, Dan believes that you create breakthrough ideas during a series of consecutive “free days” where you completely remove yourself from work (including emails or reading business journals). Mark, my friend and fellow Sullivan fan, and I would ask each other about our breakthrough idea after each vacation. They were usually good ones. 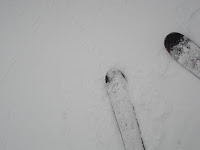 I thought of Dan this week when my family went skiing at Whistler. On day 3, my breakthrough idea came to me about half way up the mountain. I realized that my greatest achievements are ahead of me.This is true of most people but declaring it verbally and in writing creates the mindset necessary to make it real. Questions like “What are better achievements?” and “What would have to be true to achieve them?” have started forming the steps to reach them. My book is my next step.


As we left Whistler Village for the last time, a sign in front of the The North Face store captured the gist of my breakthrough: Never stop exploring (to become your best).

The weeks that fly by are also the ones that spark the most vibrant memories. I had one of those last week. I was driving hard against an aggressive deadline, but falling behind my plan. There are two options when this happens: cut corners or cut sleep. I chose the latter. I wouldn’t have felt right handing over my draft without cleaning up  my sections. It’s like leaving home with coffee stains on your shirt – it’s something you just don’t do. 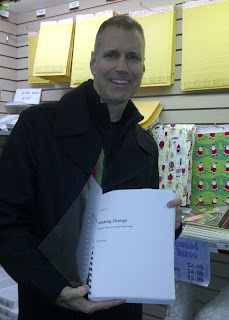 Seeing the print out of my manuscript for the first time was emotional. Flipping through the 252 double-spaced pages felt like I was holding a real book. I could sense the day when this will be true. The owners of our local UPS Store were friendly and supportive. They even gladly took my picture in their store.


The highlight of my week, however, was meeting my editor, Ken. We spoke for over two hours about my book. He observed that I talked about what I wanted my book to be. Ken wisely pointed out that he might be able to help me discover what it could be. What a riveting conversation we had. I was beaming as I shared a few of my stories and he shared a few of his views on book-making. I am excited by our partnership and look  forward to reading his notes in January.


But now it’s the holidays, a time for family and friends. It’s also time to catch up on my reading. It will be good to focus on what others have to say.

The 14 days of Changes 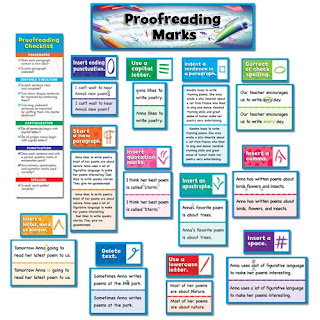 I had an exhilarating call with a professional editor whom I met through a friend. He was personable, fun and knowledgeable. We discussed my book and how a reader might use it. He shared his first perceptions and briefed me on the publishing world. My favourite observation was that fifty-five questions (chapters) may be too many. But they are all important, I thought. I also thought, I think I need a professional editor!


Time flew by, as it usually does when absorbed in conversation. By the end of the call a partnership was formed. I would handover my draft manuscript on December 21st and he would edit it over the next couple of weeks.


After hanging up the phone, I created a mindmap drawing of what I needed to do before the 21st.The page quickly became full. I needed to reformat quotes, rewrite the introduction, and write a ‘how to use this book’ section, an ‘afterword,’ and six more stories. I also had to inject more ‘Phil’ into the writing style – all in fourteen days.


Given the messiness of my drawing, and with a nod to the holiday season, I created an Advent Calendar to share my work schedule. I have five more days and nights to go and am on track. The good news is I’ll have three days to do my Christmas shopping after my draft is complete!  Phil 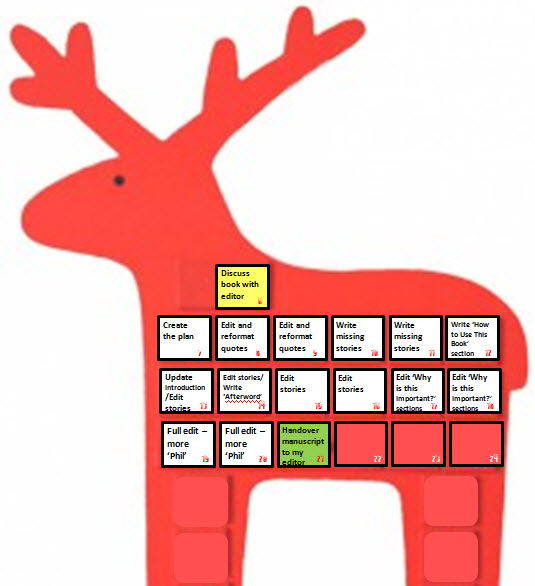 As I was rereading my old notebooks, I discovered that the ‘Change the plan, work the plan, change the plan’ quote is actually ‘Get a plan, argue a plan, get a better plan.’ It’s fascinating how time affects your memory. Both seem true but my version feels more like an ongoing way of working versus a one-off task.


It’s been 15 weeks since I shared my first plan. Some steps have been added and others have been modified. Here is a list of the changes:

It’s exciting to see my plan change over time. Completing each step gives me a more informed perspective. I’m sure my plan will change again, which is a good thing. 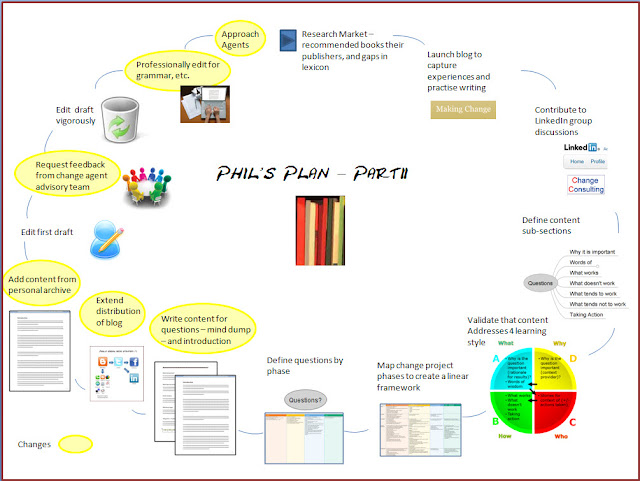