What does your wallet say about you?

I told my son Sam that I was late writing this week’s post, and I had to stay up late to do it. He replied, “If you weren’t you, would you read your blog?” My first response was, “The personal ones, where I show a part of me.” Then I added, “Since I’m into change management, I would read all of them but only enjoy the personal ones.” Sam gave me a look that only a teenager can give: “Are you crazy?” or “What are you doing?” – more like “Are you crazy?” I decided to change my topic to something more interesting.

It was very cold on Sunday (-13 C/8.6 F) when I reluctantly headed out for a 20 mile run. The thought of running for 3.5 hours outside was not “interesting.” Once I got started my mood improved and it was fun waving at the sprinkling of fellow frozen runners along Lake Ontario. 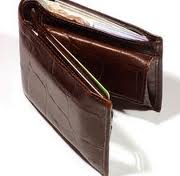 As I passed the half-way mark  my mind wandered. I thought wouldn’t it be great to find a wallet on the trail. Four minutes later, right before my eyes, was a huge wallet on the path. I couldn’t believe it. I picked it up and opened it. Everything looked in place: credit cards and I.D. were in their side slots, money and receipts were in the back compartment, and a picture of a loved one was behind the protective plastic cover. I looked around, saw no one, and put it in my pocket.


As I ran home I wondered who had lost it, how he had lost it, and what he was doing now? “Was there any foul play?” my over-active mind wondered. Once home I looked through the contents to find a phone number or email address by which I could contact him. I found an address but no other information. His number was not listed so I was stuck. Taking a closer look I found a yacht club membership. I called the club and eventually they got in touch with him. 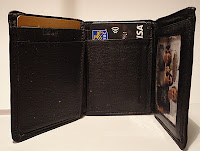 That evening he came to our home to retrieve his wallet. We talked for a few minutes, which told me more about him than his wallet. Later on, I looked through my wallet and realized it was similar to his (except for the yacht club membership). It could have been anyone’s wallet.


This theme of identity and personal expression has been raised about my writing. My readers and editor have counselled that I need to create more of a personal narrative so that my book will be more reflective of me and be more interesting. I am now making edits. You never know where you will find inspiration – even a wallet or a perceptive question from my interesting son.