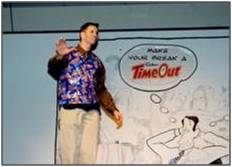 Cadbury Chocolate Canada launched a new chocolate bar immediately after it had rejoined the global Cadbury company. Since this was the first launch under new management, everyone felt pressure for the launch to be break all sales records.

Everything was big – the goals, the marketing, the selling materials, and the national training conference. At one point, we had 300 people build new cardboard displays that would be sold into stores. The line of completed displays must have been a half-mile long. I said to someone, “ Wouldn’t it be amazing if we were recognized by the Guinness Book of Records?” We looked at each other, nodded, and started taking picture.

I repeatedly phoned their head office in London, England and eventually said they didn’t have a category for something like this. I persisted with letters, calls and emails. Eventually they stopped responding to my pleas. I thought I would always succeed as long as I never gave up. This was a time that I couldn’t.

The TimeOut launch broke all distribution and initial sales records. There is always room for one more accolade.